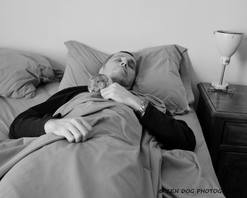 When our original rat actors got sick and canceled their acting debut, Robin Rushlau from Mainley Rat Rescue put out the bat signal, I mean rat signal, and connected us with Bill Murray and his agent, Heron. Interestingly enough, this was not Mr. Murray's first taste of stardom as he was "rescued from some hippie Brooklyn filmmakers" who had taken poor care of him. He ended up in foster care and eventually found his Forever Home.
In our second installment we also explored the marketing aspect of homeless pets... that is to say, a photo shoot to help them find their Forever Home. Melissa Weidemann, the amazing woman behind the pet photography at Barking Photo, generously donated her time and skills to photograph dogs from Brooklyn Animal Rescue Coalition, also known as BARC. Zinfandel, Marie and Diamond stepped into the spotlight and their radiant personalities shone brightly.

Introducing our star rodent, Bill Murray.
​
Bill Murray is a sweet 3 year-old Blue-hooded Dumbo rat. He loves to play fetch, snuggle, and dance on bare feet for snacks. Bill spent his early life alone in a small glass cage after being used in a movie. He was released to Maine Rat Rescue and placed with Heron who adopted him shortly thereafter. Bill has enjoyed running around with his sisters ever since, though he took a short break to return to the screen for this film.

Heron Smith has been fostering for several years and also helped out during the Westside Highway Rat Crisis. They think that rats are incredible animals who deserve as much attention and care as a larger animals and are as rewarding. "Rats are the perfect-size dog for a New York City apartment, and maybe even a little more fun." ​
Mainely Rat Rescue (MRR) is a 501(c)3 organization founded in 2007 by four women who saw a need to save unwanted and often misunderstood, domestic pet rats.
Mainely Rat Rescue’s mission is to rehabilitate and find homes for surrendered or abandoned domestic rats, as well as spreading awareness, education and support for this often misunderstood animal. While in foster care rats will be socialized with people and other rats, giving them the skills they need to make great companions. Proper food, housing and health care are provided to all rats until they find their forever home.
UPDATE: Zinfandel & Marie both found their Forever Home! Diamond is a special girl who still needs a special home. Contact BARC for more information.
Proudly powered by Weebly